The work of the CCEs is very different from most traditional sexual violence prevention programming.  We don’t use statistics as a fear tactic, tell women to rely on “safety tips,” or tell men not to get drunk in case they rape someone by mistake.  We’ve read the latest research—on sexual violence, on public health campaigns, and on campus social culture—that shows those methods don’t work 1, and often end up fueling victim-blaming or perpetrator-excusing myths. So we use a different approach.

The CCEs are focused on the ways sexual violence is woven throughout the fabric of daily life – we work at interrupting the patterns of casual disrespect and disregard which underlie this violence2.  We focus on ideals and positive practices, knowing that it’s more effective to offer people better choices than to talk about how bad the negative choices are3 - and when we shift culture positively, disrespectful and pressuring behaviors stand out as unacceptable.  Wherever possible, we focus on communities – while we are big fans of individual empowerment, lasting change has to affect everyone.

Throughout all of our work, the core questions remain fairly constant: What do we want, for ourselves, our communities, and each other?  How can we get there?

In the first month of the semester, the CCEs  take on the huge task of facilitating small workshops for the entire first year and sophomore classes.  See the details of these workshops - and the research they’re based on - at the link below. 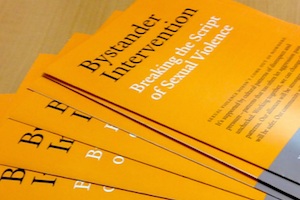 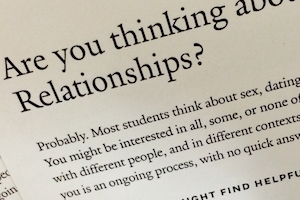 Myth of Miscommunication
(for first-years)

To see the basic strategy and layout of CCE intervention projects, take a look at our CCE project guidelines

The Problem/Opportunity: A lot of college Halloween costumes are sexualized.  There’s nothing inherently bad about this, but sometimes people end up wearing costumes that they’re not really comfortable with, and that can be problematic.  This can happen because of social pressure (either direct or ambient) or simply because it’s an easy default at the last minute to put on pre-packaged cat ears and lingerie and go as a “sexy cat”.  And when people are uncomfortable with the sexualized outfit they’re wearing, they’re more likely to feel vulnerable, experience pressure to live up to others’ expectations, or face kinds of attention that they don’t want.

The Idea: A knee-jerk reaction might be to try to discourage people from wearing sexualized costumes, but that’s the kind of negative-focused idea that garners instant defensiveness and fails to make a positive impact (as well as sliding easily into victim-blaming).  Instead, we turned to the basic CCE strategy of giving people more options, and better ones.  If people had lots of great costume materials and ideas provided, we figured, nobody would feel stuck being a “sexy cat” for the third year in a row.  And if we encouraged creativity and comfort in costume choices, that would also encourage people to think more concretely about what they want their Halloween experience to look like.

Action: The CCEs held events where we provided a wide range of materials for students to create their own costumes. We focused on offering basic clothing items, along with a wide array of craft materials to encourage creativity. Using a list of important costume questions to consider, we encouraged people at these events to think about what they wanted out of their costumes: Would they be warm enough? Could they dance in their costume? Could they use the bathroom in their costume? Some of these events also featured cards to help students plan out their nights and consider, in advance, how they wanted their evenings to progress.  Finally, the CCEs also made a Tumblr featuring a collection of creative individual and group costume ideas (complete with hilarious pictures).  The easy access to ideas and materials, combined with conversations at the events, helped students consider their options and feel empowered to spend Halloween in a way that felt comfortable and exciting to them.

The Idea: In its original form, the app was significantly controversial. We know that the attitudes that people have around sexual encounters do affect rates of sexual misconduct, so the app had the potential to be dangerous. This also meant that improving the app, rather than shutting it down, represented an opportunity to set more positive expectations and attitudes around these blind date dances. While forcing the app’s creators to shut it down might have been a natural administrative reaction to the situation, we knew that doing so would cause tension, and might inspire imitators to create apps to take its place.  Instead, the CCEs saw this as a space for positive intervention and reframing expectations–the app had been created as a tool for students, and it could make the blind date dance process more positive for everyone involved. This was an opportunity for collaboration: if we reached out to the app’s designers, we could preserve the benefits the app offered, while improving upon its more worrisome attributes.

Action: The CCEs collaborated with the app’s designers to create new questions for the student profiles on the app. These questions avoided some of the shortcomings of the original app, and replaced its more pressuring and limiting questions entirely. By reaching out to the original designers and collaborating with them on improving the app, we were able to expand the app’s functionality and encourage the use of more respectful and inclusive language on campus. True to our mission of opening up spaces instead of shutting them down, the CCEs were able to improve upon the existing app, making the blind date set-ups safer and more comfortable for users.

The Problem/Opportunity: Yale hosts a variety of themed dances throughout the school year. These events can be enjoyable to many students, but present limited opportunities for alternative spaces or experiences. Expectations surrounding these dances may result in social pressure to drink or hook up with your date. With few spaces for casual conversation before, during, and after the dance, it is hard for people to get to know each other or discuss how they want their evening to look, and they may feel vulnerable to or limited by others’ expectations of the night. As students, we knew that many of us would use alternative spaces if they existed, and as CCEs, we knew that they could serve an important purpose in making students feel more comfortable at these events.

The Idea: One approach to lessening the social pressure surrounding these events might be to more aggressively target and shut down pre-game room parties or other unauthorized events involving alcohol. We knew that doing so would not be well-received among the student body, and that we would be limiting students’ pre-dance options even further. Instead, we saw these dances as opportunities to create spaces that would enhance people’s enjoyment of the event, while also encouraging communication and safety. If we offered enjoyable alternatives to pre-, during, and post-dance events, we could target the social pressures that can surround these dances, while not dampening people’s enjoyment of the events themselves.

Action: In keeping with the CCE focus on the proliferation of options, we created pre-, during, and post-dance events targeted to different themed dances throughout the year. For Yale’s semi-formal blind date dances, we hosted elegant pre-dance mocktail hours, encouraging people to mingle with their dates and friends over hors d’oeuvres and provoking longer conversations and plenty of laughter. These events proved a popular alternative (or at least addition) to packed and sweaty pre-game parties, and created a space for communication and bonding. During several dances, we set up cool-down rooms in the event space, providing water, snacks, and a place for students to take a break from dancing. We also held post-dance events, with food and movie screenings, to offer an alternative for those who didn’t want to return to their or their date’s suite (or wanted to take a break before doing so).

Opening Up Possibilities: A Tale of Many Yales

The Problem/Opportunity: Sometimes, students experience ambient pressure to engage in a certain kind of sexual or romantic practice because they feel that it’s the only available option to them. The idea that “everyone” is participating in one kind of sexual practice can make students feel that there is no room for them to make the kind of sexual and romantic choices they want. Yale’s admitted students weekend represents the first time incoming freshmen may encounter these expectations, and a unique opportunity to demonstrate the range of experiences and choices that students actually have and make at Yale.

The Idea: If incoming freshmen are aware that Yale students make a wide variety of sexual and romantic choices, this will help to debunk the myth that there is one right way to have a social life at Yale. By creating a space for discussing and debunking these myths, the CCEs can address any concerns that incoming freshmen might have about the social scene at Yale. Engaging new students in respectful and inclusive conversations about sexuality and desires will also set a positive standard for their time at Yale, and foster this kind of communication in the future.

Action: The CCEs organized a panel discussion for prospective students during Yale’s annual admitted students weekend. The panel featured upperclassmen with diverse sexual and romantic experiences and presented a variety of snapshots of the social scene on campus. The panel helped incoming freshmen to see that there are a range of positive options available for them at Yale, and encouraged mindful engagement with a sexual culture that recognizes and values many different choices.

A Culture of Conversation: Informal Interventions

The Problem/Opportunity: One varsity athlete CCE’s team held a weekly Sunday brunch, which frequently turned into a weekend tell-all. For freshmen, hearing many stories about sexual encounters from the upperclassmen created the pressure to hook up and then detail the experience, in order to feel that they fully belonged to the team. After becoming a CCE, this person realized the need for an intervention in order to reduce the pressure these conversations created and to prevent freshmen from doing things they didn’t want to do just so they could fit in with the team.

The Idea: CCE interventions can be very small-scale, something as simple as talking to a  friend. Small group conversations with teams, clubs, and groups of friends are also effective in shaping a more positive campus climate. A lot of the CCE work takes place within a CCE’s own community as a way to make use of the connections and knowledge that CCE has about the community’s dynamics in order to impact the group most effectively. The solution of a casual conversation was just the right intervention for a CCE with an established place within the group that needed an intervention.

Action: This CCE had a casual conversation with the upperclassmen about how it felt to be a freshman during these brunches. The teammates shared that they too had felt this pressure as freshmen and were glad that it was being addressed. The team gladly moved on to discussing more beneficial and positive topics. This led to a change in the conversation pattern, but also showcased the potential for the positive impact that upperclassmen can have on younger students.

CCEs come from all corners of campus life, and we spend a lot of time working in our own social circles, identifying troubling patterns and finding more empowering, respectful alternatives.

The SHARE center’s professional counselors are available 24/7 to offer information, advocacy, and support: 203.432.2000.  All calls are completely confidential. You can also find helpful information on the SHARE website.